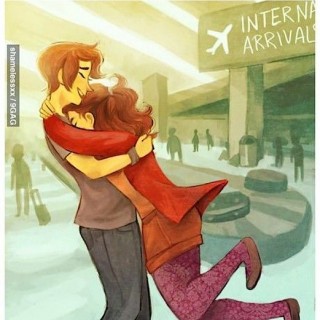 Pack your heart in a suitcase! And seal it with a kiss.

Let’s Face It, a long distance relationship challenges you on every front and a lot gets lost in between. But it’s important that you allow yourself to be tested by those waters.

Here is a glimpse of Naina and Sudeep’s simple and shared understanding of their relationship and how they’ve overcome the trials that long distance relationships entail. Naina is an independent writer, creative thinker and part-time family baker. She chases after the simple things in life and finds happiness in the ordinary.

Sudeep and I were always at loggerheads in college. We always had to get one up on each other. I hadn’t completely outgrown being a ‘tomboy’ and he was at that crossroad where he couldn’t understand what to make of me, and yet in a sense we were closet comrades, quietly standing up for each other, without either of us realizing it.

As college came to an end and our ‘gang’ went their separate ways, Sudeep and I slowly realized that we really missed having each other around and decided to steadfastly keep in touch. It was through our many midnight conversations over the next year that we developed a deep seated friendship that formed the very basis of our relationship. Everything was out there. We were easily honest and fiercely loyal. We were inseparable as friends and before we knew it, we graduated to being each other’s first loves.

Soon after college came to an end, I was to take off to Japan on a six month internship. That was the first time we were to test our relationship, to see if it had legs, when we were apart. Sudeep begged me not to go and I had half a mind to cancel the trip, because I couldn’t bear to see him so disheartened and I really wanted to be with him, but there was this other side that couldn’t understand why he was being so demanding of my time.

That’s when we had our first series of exciting adult fights. We indulged in blame games, name calling and exhausted with all the hurting we decided to put our misery down, cut our relationship down to size and move on. And we did – for a grand total of one day! Truth be told, we were fools for each other and made promises to power through this, no matter what. We made a pact to take this one day at a time and pace ourselves out. Sudeep hates writing to the point where he’ll only do it when he’s angry about something and therefore has an opinion to voice or if it’s an official mail that needs to be written. But for the time we spent away from each other, I have a virtual mountain of e-mail to burrow in; written by him to me, filled with all of the things talking made easy.

Even though we were so far away, we still had our share of arguments and irrational fights. A lot gets lost in the distance between. Words get misconstrued, you forget to show up on Skype, you’re venting, and you’ve had a bad day at work… everything becomes potential fodder for a fight. But we were more than the sum of our fights and both of us believed that completely. Both of us were quick to forgive the other (him more than me). Plus, if I went mum for a couple of days, he’d always reign me back in by helping me talk things through. When I’m upset I usually go quiet. I don’t talk, even though I’m seething on the inside. Sudeep could see through all of this and got me out of the darkness by making me laugh.  Every time he broke out into off-warbling, ‘Happy Birthday’ in Malayalam, in a silly falsetto voice, the horridness of whatever I was going through would just melt away.

Those months away from each other, made us go out of our joint comfort zones and think of each other so much more than usual. It made us understand ourselves as individuals and made us test our dynamics as a couple. We understood the concept of space and to willingly give each other that, when needed. We learnt that if we truly loved and cared for the other person, they would respond in return, the same way (in a year or so, but it’s worth the wait and the aha! moment that they have). We also realized early on, that there had to be more to us than the relationship we were in, and to not allow it to consume our every waking moment.

So we filled our lives with ‘stuff and things to do’ to get our minds off each other, and to lead more productive days. Friendships that were strewn to the side were rekindled. Hobbies and new experiences that we didn’t have time for earlier were explored.  Still, that empty feeling at the end of the day, of not having each other around, loomed large over our heads as we collapsed exhausted onto our beds.

Trust, a huge part of any long distance relationship always takes a beating when it’s subjected to the Minotaur of the mind. It’s easy for your mind to wander and make up situations, or to over think the normal and give in to a false perception of reality. Sudeep and I were both honey trapped into this, but we overcame it early on, because we both knew that we’re not of that mould. There’s too much love and friendship between us, for us to be seeking any of that elsewhere.

To a great extent, both of us share exactly the same value system, want the same things out of life and have clearly defined roles in our relationship. While we’re wildly different in our choice of music (I love Ella Fitzgerald and he loves Metallica) or fitness goals (Isn’t digestion an ab exercise?) we’re committed to each other completely (idiosyncrasies included). That in a sense, has helped us scale many mountains in our speckled sojourns away from each other, over the course of the last 11 years.

On a side note, the immediate male influences in my life were stifling and not very progressive to me as a woman. It always left me feeling tethered, with a low sense of worth. It was so important for me to be with someone who gave me the full freedom to just be me, who gave me my space, was kind and made me feel loved. Sudeep was all that and more. So no matter what, I told myself, I would put all of me into this relationship to make it work because I couldn’t do without this elevated sense of self he left me with.

Sudeep and I, both have very similar sets of parents. Heavily influenced by their relationship with each other, we were crystal clear in our heads about what we didn’t want in a relationship. And so, in our quest for companionship and love, we both unwittingly charted the same course, and crashed into each other.

As I write this, it’s uncanny that I’m in the midst of (hopefully) the last long distance chapter in our story. We’re both of the conclusion that we can’t do anymore of this being away from each other business and that the next time either of us travel, the other will be in tow, or least in a suitcase.

Honestly, a  long distance relationship challenges you on every front and it’s important that you allow yourself to be tested by those waters. It reveals much about the ‘three’ of you. That’s the light you shine on, when you want to see the myriad of details etched on your relationship. It gives you the wisdom to change, to maintain what you already have, to decide to be better, to heal and to grow.

There have been times in our journey when we couldn’t control the outcome of our arguments or the tenacity of my temper. My human frailty always drove me back to my religious faith. It made me realize that both of us still struggle with our humanness and the drawbacks of having that show up in our relationship.  Cultivating the habit of being a peacemaker, of forgiveness, of bearing with one another, of being kind, patient, not remembering past faults and protecting one another, goes a long, long way in ensuring that you safeguard the interests of your heart from the world and from yourself.  Our faith, is what we often return to for making relationships, especially ours, work. It’s helped both of us come to terms with each other, warts and all, because we’ve learnt to place the other ahead of our personal agendas.

Sudeep and I have this strange bond that the world cannot comprehend (there’s hardly anything of us together on social media) and distances can’t divide, because we’re bound by something greater than blood. We’re bound by daily practicing our love.

2 Replies to “Pack your heart in a suitcase! And seal it with a kiss.”