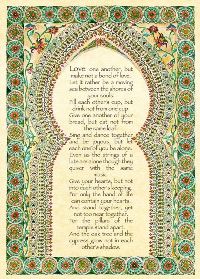 This three part series aims to discuss one of the key cornerstones for any healthy relationship –Mutual Respect.

I am a diarist. From the time I was twelve years old, I have kept a private journal in one form or the other. The practice serves me well in the work that I do today as a writer and designer because it allows me to fish out the good ideas from the general morass of thoughts that my mind generates. I owe this space to my family and to the two roommates I’ve lived with who have never for a day given me cause to worry that my private universe may be trespassed upon.

As a teenager, I remember, I would purposefully keep my dairy lying around to see if any of my family members would pick it up and read it. Not that there was anything particularly scandalous in those pages. The angst-ridden stream of consciousness of a teenage girl might be the most boring read ever. But that was not the point. The point was would anyone in my family get so curious as to violate the one unspoken rule in our house that no matter what, we never took a peek into each other’s private affairs. We did not open each other’s letters. We did not rummage in each others’ purses and bags. We did not listen in on private conversations on the extension phone. We were even dissuaded from reading the newspaper over each other’s shoulders. My father and I went so far in our mutual respect as to solve the Telegraph Quick Crossword in pencil so that the other could erase the solutions and have the pleasure of starting from scratch. So far as my diary was concerned, it was often picked up…from the sofa, from the cane chair on the verandah when the rain came in…only to be put back on my study table but never, ever was it read.

I never thought of these little things as particularly important but as I grew up and stepped into the bigger world outside, I realized it had formed an invaluable personal metric for me to measure respect for personal boundaries in a relationship. Popular media constantly plies us with the idea of instant success. Like instant noodles and instant coffee, falling in love, that too at first sight is supposed to solve all our relationship issues in one stroke. But, in reality, falling in love is not the same as making a relationship work, that too over an extended period of time. Love counts for a lot but so does respect. In fact, when it comes to the most intimate relationships of our lives where we share our personal space with someone, love can easily go out of the window if a sufficient amount of respect is not there.

When we think of respect, what commonly comes to mind is the veneration or admiration we feel for someone who is superior to us in some way. In our materialistic culture, that means high ‘net worth individuals’ and movie stars. But the other meaning of respect is regard for the feelings, wishes and rights of others regardless of whether they are higher or lower than us in the social hierarchy. This is the form of respect that comes into play in our every day interactions with other human beings, especially our partners and children. Having a vague idea what love is all about, many of us end up equating love to control. This might be news to a lot of people but trying to run a loved one’s life is a boundary violation. So is hovering around our loved ones like a helicopter and micro-managing their affairs to the extent that they forget how to think for themselves or quake at the thought of speaking up for themselves. One of the most egregious examples of lack of respect is when we force-feed others. Everyone, including children, has a workable sense of their own hunger and thirst. To supersede it with ideas of our own as to how much they should eat and how often, we are not only showing disrespect, we are setting them up for a lifetime of weight-related problems.

Even if we are not conscious of it, many of us do get the concept of a physical personal bubble because of its overlap with sexual boundaries. But the same can’t be said of the psychological bubble and by extension, the equally important, social media bubble. All around us are the peekers and sneakers: spouses and partners who think nothing of looking through their significant other’s mobile phones or browser histories as if it was their birth right. We all know those suspicious spouses who keep a constant tab on their partners’ Facebook friend’s lists. Then there are the folks who proudly announce to the world that they have access to their partner’s email accounts. I find this particularly disturbing as it shows complete lack of respect not only for the partner but to all those people who are writing to them in confidence.

The thing is you can still be close to someone without invading their private space. As Kahlil Gibran so famously said, “The oak tree and the cypress grow not in each other’s shadow.” In fact, a part of respecting others and giving them their space is to keep your own curiosity, suspicions and speculations at bay. If something is bothering you, you can always ask them about it but you cannot snoop around behind their backs. That to me spells absolute lack of respect. If you want your partner to trust you, you have to learn how to live with the amount of information that he/ she freely shares with you. You have to accept that others have the right to tell us things at their own time and pace. Not only that, they are entitled to their own secrets if they want to have a few. A relationship is not a confessional. Nor is it a customs declaration. In fact, I would go so far as to argue that in a normal, healthy relationship it is always fun to discover things along the way. Counter intuitively, the less we pry and poke, the more freely confidences are shared. The more we allow our loved ones to be who they are (instead of who we would like them to be) and respect their boundaries and preferences, the stronger the relationship is.  Love may be the fuel that keeps a relationship going, but respect is the cement that holds it all together.

With due respect (Part 3), will explore ways to develop self respect for oneself so that it can enhance feelings of mutual respect between partners.