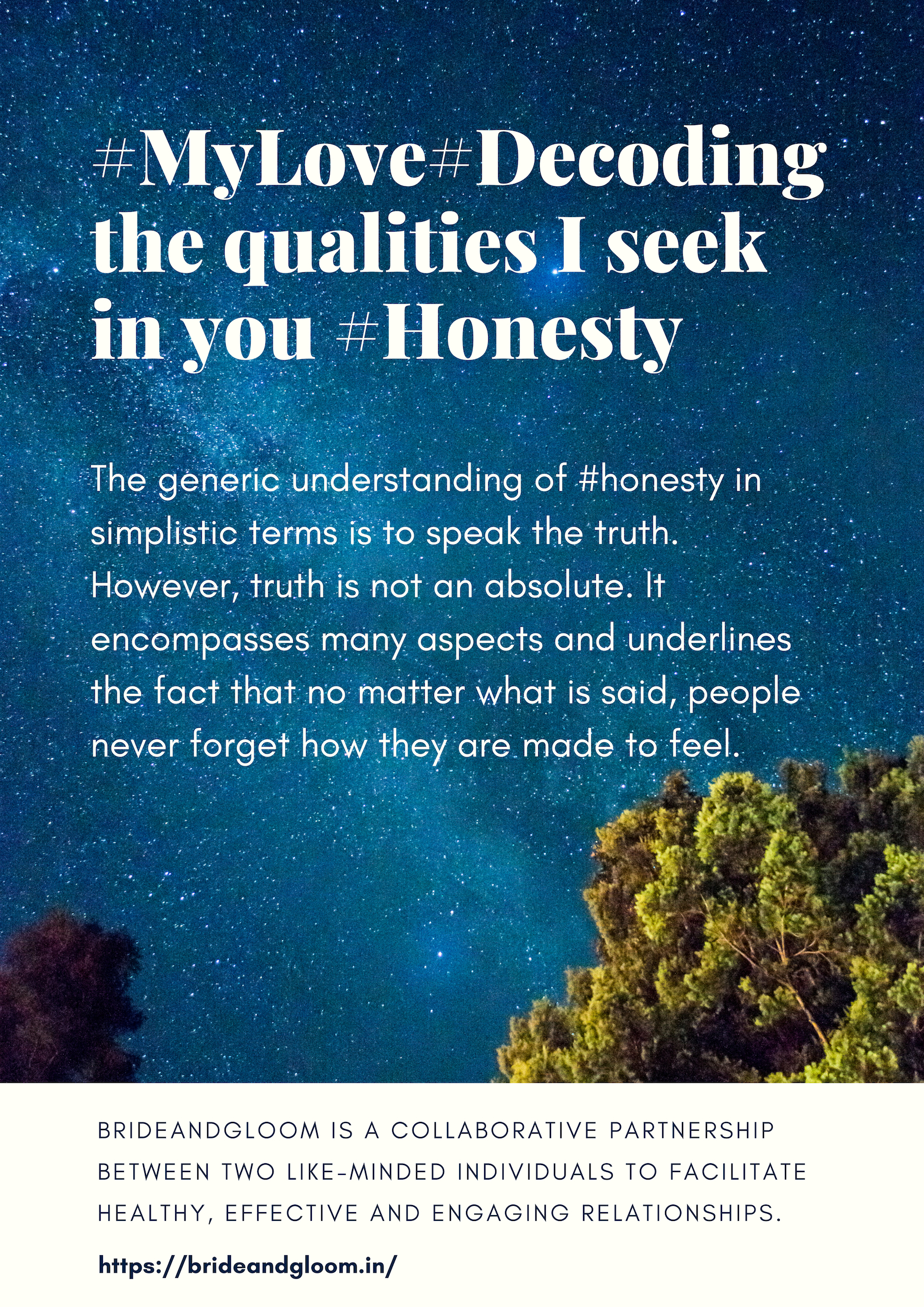 For a lot of us, the generic understanding of honesty in simplistic terms is to speak the truth. However, truth is not an absolute. It has to account for the situational context and perspective. Therefore our understanding of the truth requires that we interpret it as a combination of how we look at things and perceive them.

“That dress doesn’t suit your style.”

These statements are somebody’s truth. When he expresses it, he’s probably being honest. How open are you to receiving (hearing) your partner’s honesty?

Most of the time we’re apprehensive about building an honest relationship, because we fear that there is nobody to receive it. Sometimes, when our partner starts being “too” honest, we might have a tendency to become sensitive.

There is another aspect of honesty in relationships that extends beyond expressing an opinion or making an assessment. It is also about being open to sharing emotions and feelings. For example,

“ My friend is forever whining for not getting a promotion.”

When someone is open to sharing their feelings, how do you respond to it? We have noticed that during couple’s sessions when asked the question, have you told your partner how you feel, many respond by saying ‘no!’ This is because they’re not confident about how their sharing will be received. There is an underlying fear of rejection. Looking at it, alternatively, the fear of rejection exists because their honesty is not received as they expected. Here lies the challenge.

Honesty requires a space and a mindset. Within this space, being honest (giving) is equally important as receiving (accepting honesty).

So when your partner expresses his honest opinion about your cooking because he doesn’t like it, how do you feel? Do you get upset because you think that he just dismissed all the effort you had put in to cook it? Do you feel hurt and angry? If yes, then you must ask yourself, were you looking for “his honest feedback” or an “acknowledgement for your hard work and effort?” His feedback might be based on his sense of taste and likability. If questioned further he might even justify why he didn’t like it, but is that what you really wanted to hear? More importantly, did you think he would change his mind?

(The next in our #MyLove #Decoding the Qualities I seek in you series, is #Decoding Understanding that will be published tomorrow / This post was a Featured Post on Indiblogger on 15 February 2019)