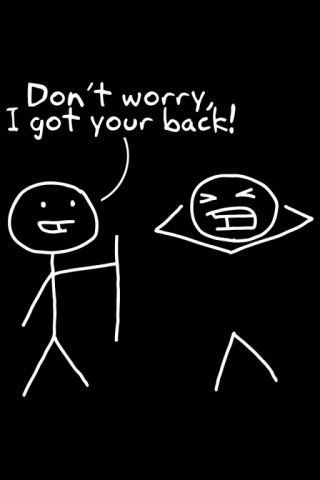 When we were dating, my boyfriend was my good friend with whom I shared everything. I could say anything and knew that it would be accepted at face value. It wouldn’t be flung back at me during a fight or shared with others. Here was someone who truly listened and knew me – the vulnerable me who was scared of the world and had insecurities that stretched a mile. A friend who finished my sentences and could read me like a book – knew how I would react or what I would say in certain situations. A friend who made my day complete, whose presence protected my sanity and in turn, I depended on him completely.

I didn’t feel the need to invest time and myself to nurture any other friendship. At this point it didn’t matter since his friendship was more than enough to make my world a happy place. I let all other relationships, friendships slip through, happy and content being a twosome.

Then we got married!

Our friendship continued but its status subtly changed. The husband-wife relationship we now shared suddenly meant that we could no longer say the things we wanted to tell each other just like we wanted to say them. They had to be worded differently and their rippling effects impacted other areas of our everyday lives and relations. My one and only friend was still my close friend but not a friend anymore!

At this juncture, realization dawned that I had no other close friends! Slowly the need to find someone with whom I could let my guard down began to resurface. Growing up, no one tells you that as couples we must accept that one person cannot fulfil all our needs. Idealistic insistence that your husband or wife is your best friend (which definitely can be true in some rare cases) puts tremendous pressure not only on the self but the other partner and the relationship too.

Within my friends’ circle, I’ve seen numerous instances where either the husband or wife has reached out to someone else to fulfil the need for a close friend – someone who made them come alive, feel young and attractive again. These friendships are an outlet or release from the boring mundane existence. They come with no strings attached yet are beneficial to the self without any of the marital complications. One feels compelled to keep such friends and friendship secret – which in turn adds to its mystery and feels even more satisfying. Simply put, their presence keeps life exciting, there’s a reason to wake up in the morning and look forward to the day. Some blossom as office romances since more time is spent at work than at home. In many others, these serve only as friends with benefits or can potentially lead to other complications as many couples have found their soul mates in people other than their spouses.

I suppose one way of dealing with this scenario is that even when openly discussing about this friend and friendship you don’t give this relationship a name. I feel when you try naming it, you tend to box it into one of life’s many nuances and that not only takes away the charm of the relationship but also certain expectations start automatically building around it.

Unfortunately here is when slowly yet steadily a conflict of interest begins to arise – the conflict could be within us or a perceptive better half picks up the subtle changes in the marital relationship and most often can correctly point out the ‘friendship’ responsible for the change.

A good friend’s husband is the kind of person who takes his friendships a bit too seriously – he always bends over backwards to help others, especially if it is a woman who comes across as vulnerable. Outwardly there is no malice in his behaviour and he openly informs his wife about what he’s doing. He doesn’t get sexually involved with any of these women but his ego gets a huge boost every time he extends support. Also he’s accessible to them whenever they reach out to him, day or night. This feeling of helpless dependence on him and his ability to fulfil those needs gives him a high. It’s possible that there is a deep-seated insecurity here which only gets addressed or fulfilled when he’s made to feel important or when he comes across as the ‘only’ person who can truly help.

It really bothers his wife and after many such incidences she’s refusing to accept this behaviour any longer. He’s tried to explain that he does this from the goodness of his heart and believes that god blesses him every time he’s attentive, helpful and nice. So she’s given him an ultimatum – it was time he decided if god’s blessings were more important to him or his wife and the family! They’re now at a crossroad trying to figure out how best to deal with the situation.

Yet another kind of friendship exists which without the need for any sexual connotation can hold us together – keep our sanity intact in this crazy fast paced world we live in, these days!

While we were in Mumbai and Gurgaon, there were a few of my husband’s friends whom we met almost every weekend – and in most occasions it meant eating and drinking with them. They were the ‘drinking buddies!’ We took turns to host the evenings and although sometimes it did bother us (especially the wives) we soon realised that although there was way too much drinking happening (which definitely wasn’t good for the health!) their discussions ranged from religion to politics to work to office politics to photography to life to music to films…an endless list. In other words, what really mattered about the evenings were the conversations. It was their ability to connect at such different levels that the drinking lost importance. No, they didn’t stop drinking nor did they drink any less but it didn’t matter. The other two important aspects were that in most cases they sat at home drinking and at times when they did drink in a restaurant or in public I’ve rarely seen them misbehave or become rowdy. Most of the ‘boys’ would drive back and once behind the wheel their love for their vehicles (perhaps not as much love of their wives and family) took control of their senses!

Friendships are extremely important in our lives. They have the ability to free us from life’s unending pressures, they spark faith in us to keep pushing ahead, and they are our anchors that keep us grounded. Every time there arises the need to redefine these friendships, I think the question one needs to address is how does the friendship impact the marital relationship? Simultaneously, it is essential to take a step back, look within and really try to understand why the friendship is so important to the partner. This acknowledgement not only means you’re accepting its importance in your partner’s life (which in turn makes them feel like you understand) but helps to identify the crux of the issue which is truly bothering us (sometimes it’s just a manifestation of something deeper) and also invariably provides a direction forward.