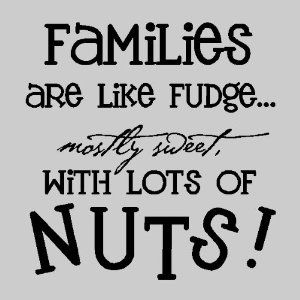 Now, that was the heading of an article by Vijay Nagaswami. It reminded me of the many conversations with my husband, especially when we’re in the mood to either have a good laugh or hurt each other.

What is it about the ‘family’ that makes these conversations difficult? We’re either overprotective or hypercritical – each trying to outdo the other.

When we were married, we realised that we were mere pawns – incidental to the marriage ceremony. It was our families that were playing the major roles and in no uncertain terms, we were told to keep away. So we both learnt the ‘art of silence.’

I lived with my in-laws for about 2 years before we moved out. My husband got a job in another city and I joined him, gladly. Sometimes I feel if we hadn’t perhaps we wouldn’t still be married! Interference was an understatement. We were not considered a couple who could spend time on their own or do our own thing. Everything had to include the family. Sometimes it felt good while at other times it was a challenge. Why did it seem like we were going against my in-law’s wishes when we wanted to do something on our own? Even if we decided on the spur of the moment to have dinner outside, I was made to feel guilty for having not informed my mother-in-law in advance. She wouldn’t have cooked for us. I was bluntly reminded that “it was a waste of her time.”

I remember the birthday and anniversary celebrations when the same set of people got invited – it was never about our friends or going out to celebrate ourselves, perhaps over the quintessential ‘candlelit dinner!’ It had to be celebrated at home with a home-cooked meal – which ultimately felt like an obligation.

Similarly, my parents too had their own set of expectations from us. In fact, most often, their expectations were in competition with my in-laws! So on most occasions, it was a balancing act for us – sometimes we gave in while at other times the pressure was on me to balance with my husband, his family and mine!!!

Even though we had a ‘love’ marriage, we actually ‘re-discovered’ each other when we began living on our own in a different city – it meant being away from both families. The only connection was a phone call every now and then. It didn’t matter much then because we exercised selective information sharing – what they didn’t know didn’t affect us.

Dr Nagasawami was absolutely right to suggest that ‘the resolution of the ‘family vs family’ conflict can only begin when the couple starts to think in terms of ‘We and Our Families’’. He says, “…couples should define their mutually comfortable marriage space and establish boundaries between this and the family space, thereby making the marriage space sacrosanct, inviolate and inaccessible to anybody other than both the partners.”

As a couple, we realised just how much happier we were, away from all the family drama. Family in small doses helps to build a stronger bond. But did this mean we were completely exempt from their influence? Far from it! Every phone call brought back memories and with it the feeling that we had so desperately run away from.

Yet, those earlier experiences gave us enough ammunition for future reference. We continue to use them liberally. Sometimes we laugh at each other’s expense while at other times it is a way to create maximum hurt.